A record-breaking 540 swimmers took part in the annual Louvre Castle Swim on Saturday, raising a total of £3000 for Guernsey Mind.

The popular event is sponsored by Louvre Group and organised by the Guernsey Swimming Club.

Individuals of all swimming abilities swam from the Slaughterhouse slipway to the Horseshoe Pool at La Vallette, the route taking an average of 25 minutes to complete.

The Castle Swim is not a race but some experienced swimmers challenged themselves to complete the route in under 10 minutes, with Amelie Torode and Delphine Riley being the first out of the water. Another swimmer who finished impressively fast was Graham Hall, who also achieved his goal of under 10 minutes.

All swimmers over the age of 11 were invited to take part, but there was a special prize for the oldest participant. 88-year-old Mike Banfield was awarded the Bill Green Memorial Trophy, a prize that has been presented at the Castle Swim every year since 1996.

Jo Norman, Director of the Guernsey Swimming Club, said: “We are overwhelmed by the turnout for this year’s Castle Swim, it was the biggest we’ve ever seen! After the last few months, it was fantastic to see so many of our local community enjoying themselves in Guernsey’s beautiful waters whilst raising money for a great cause.”

Louvre Group Associate Director Matthew Gilligan added: “We are thrilled with the number of people who took part in Saturday’s event and the impressive amount of money raised for Guernsey Mind. Our local charities need our support more than ever so we are very proud to be able to help out this important charity. 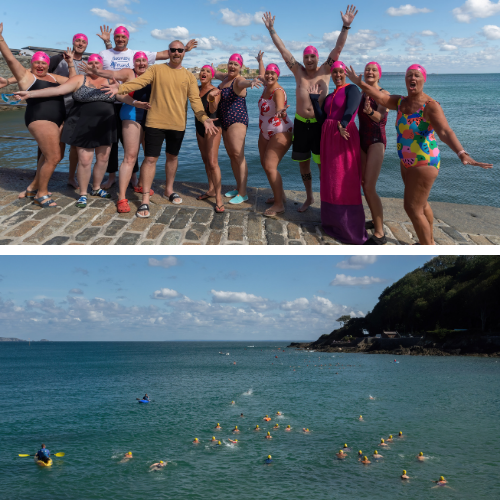 Previous Back to News Next